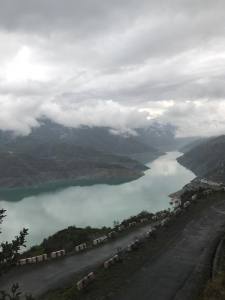 “Some beautiful paths can’t  be discovered without getting lost.”  -Erol Ozan

I am beginning with this quote. why?? It’s because I was lost once. After completing my graduation from THDC-IHET a college which is situated in a place as beautiful as paradise but with no promise of career growth at the time of my graduation, I was stuck in time, with everything progressing around me. Throughout my graduation, I was an average student in academics, but inside my heart, there was this zeal to create things, to solve the real world problems, to do something whose impact I could see and measure, but this attitude of mine led me further down on the lost road.

While most of my colleagues have started to look for some sustainable jobs, which were completely unrelatable to their graduation degree, I was very stubbornly trying to make some use of my engineering knowledge. I never heeded to the saying that goes as “beggars are not choosers” and even though I was in a burning need for a job, my demands for my first job were quite high. Firstly I didn’t want to work in big companies (the one which hires everyone, if you know what I mean) because I would be lost in their large, mechanized system. Also, I didn’t want work for comfortable government jobs (ideal Indian jobs) as in my opinion “All ease and no challenge makes Jack a dull boy.”

So here I was with near to zero skills and experience for the present corporate world of technology, dreaming of walking in the steps of great innovators and entrepreneurs like Elon Musk, Jack Ma and Andy Rubin with just a tenacious will to achieve my dream. A dream that one day I will play a major part in remodeling the society. Hence I was looking for a company which would be ready to hire a newbie like me, and the people working there would be ready to become my sensei and teach me all the Jutsu(metaphorically).

Amidst all the despair, I started to detest my college, the place where I had some of the best time of my life but the lack of opportunities at that place made me regret the choice I made four years ago. Then one day, I got a call from Professor Purnendu Pandey, from my college, it was a bolt out of the blue for me as he told me that a company named ColoredCow have opened an incubation center in our college, and they are looking for people to hire, and he asked me to apply if I am interested.

On knowing this, my honest reaction was,” A company opening an incubation center in our college!!! I think that they are in more need of work than I am in need of a job.” I wouldn’t have imagined getting any such opportunity in a place like this even in my dreams. Anyhow I decide to give it a try, and it is then that I realized the significance of the quote,

“Some beautiful paths can’t  be discovered without getting lost.”

I skimmed through their website, it looked quite amusing, containing the detailed case study of all the projects they have worked on. Their vision of standing out from the crowd(hence the name coloredcow), aligned with my ideology. Their team looked young and dynamic, most people were around my age group. I had a feeling that I will be able to connect with work they are doing. So I decided to give the interview, I watched a motivation video in youTube and the marched into the conference room where the interview was scheduled. Professor Pandey briefed me about the company and told me that the founder of the company Prateek Narang will be taking my interview. I have done some research on him, I have seen his photo on the website and talked to students who have been in the Interview with him. I knew that I neither have the skill nor the experience required for the job profile, but I was determined to show him all that I have got, and that was just my will.

So finally it was time, the interview began with him asking me the basic questionnaire and I was asking him my various queries. Then in the middle interview he said something that I was not expecting, he said,” Shubham, let’s drop this interview for now and why don’t you come and work with us for few days and see if you like our work culture, and in that time we will also know what you are really worth”. I was not expecting a freedom of choice to be offered, I had a belief that the answer of a job interview is always an absolute yes or a no. But with the choice being offered I had nothing to lose, even if don’t get the job, I will still gain the experience, so I agreed. He then introduced me to his team of four which was working in this office. Each of them looked a few years older than me, but they seemed to be quite well versed in their trade. They were very affable too. They discussed and planned the training layout for me and we started from the next day. 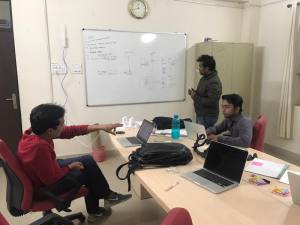 On my first day as an intern, I came to the office, which currently comprises of a single room in our college building (and I thought of the great entrepreneurs who started in garages, I am going in the right direction :D). So there we were four senior developers and a newbie intern sitting on the same table, but I didn’t feel intimidated even for a second as all were quite casual and friendly. They had a project for me and wanted me to contribute to the growth of the company from the first day itself. This led to the feeling of connecting with the team and the company from the very first moment and was it was quite impelling. The casualness in communication allowed me to speak my mind out and understand the problem better. It also allowed me to understand the essence of feedback and how necessary it is for improvement.

This free flow of communication allows everyone to express their views and thus it’s easy to generate new ideas. On the first day, they taught me the importance of documentation and planning, to which I used to pay very less attention earlier. I realized its importance and will work on honing it to perfection. They showed me the pictures of their Gurgaon office, which looked quite appealing, and I would certainly like to visit it and work there someday soon. 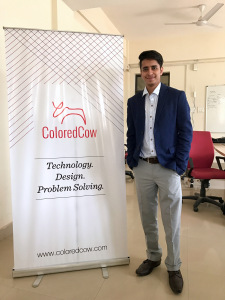 They also suggested me to start writing a blog or rather I should say they encouraged me to do it. And here I am taking my first step and honestly it feels great getting out of your comfort zone and learning something new. Thus as the joker in some alternate reality said:

“Growth is like gravity, all it takes is a little push from your comfort zone.”

I would like to mention a line I came across in one of the videos of Jack Ma (Alibaba Founder), he says that before you are 30 years old you should follow someone good, a boss, a team/ company which will bring out the best in you. I guess ColoredCow could do that for me.

In the end, I would like to convey my first-day experience in ColorCow with the following statement:

” Acquiring  all the luxury and all the money will not give you happiness, but working on something and getting a feeling of accomplishment with its growth every day will give you the real happiness.”

So guys, keep a tag on this blog to know more about my journey in the ColoredCow.