The Glific project is being built by a distributed team, working across timezones. In addition to that, we have sub-teams for frontend and backend applications. This results in short release cycles, where we fix issues and release them quickly. To allow for quick integration and assessment of the work, the need for Continuous Integration and deployment was felt. That ensured the UAT was always up to date with the latest code for the product development team to look at.

In Glific, we decided to deploy and avail the changes at the staging site as soon as it got merged, and we needed the CD implementation.

We used the following AWS infrastructure to achieve the target goal. We are not going in the technical implementation but on the overview of how we have set it up currently, and why we went with this setup.

We had the following tech stack and we were thinking about the possibilities of different infrastructures. 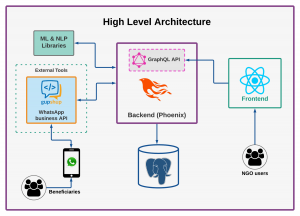 “How to eat an elephant? Cut it down into pieces and take one piece at a time. Have that resilience to make sure you finish that elephant.”

Following the same philosophy, we divided the whole process into two different phases

Phase 1: Dockerizing both the applications.

Both applications are fully dockerized. We can create the latest docker image and run it in any stack compatible with docker.

Why did we go with a docker based setup?

We researched and found there are lots of advantages of going with a dockerized setup.

Compatibility and maintainability: We found it most compatible as It provides a consistent environment for CD. After the initial setup effort, it has low maintenance cost compared to non containerized applications.

Rapid development: It has comparatively low deployment time as we can easily put a new version of the software into production rapidly and if anything goes, we can quickly roll back to a previous version.

Check out how I’ve implemented it in my another blog on Continuous integration & deployment for open source project.

As we dockerized both applications in phase 1, it was the time to get benefited.

The tech stack we used to design our infrastructure are:

Amazon ECS is a highly scalable and high-performance container orchestration (automated configuration, management, and coordination of computer systems) service meant to support Docker-based containerized applications to run and scale as needed. You don’t need to manage the infrastructure or other operations such as tasks, services, auto-scaling, etc.

ECS gives two choices, either we go with EC2 or Fargate. We found the following reason to go with Fargate.

Resource utilization: Most of the time, the EC2 instance doesn’t utilize the resources correctly while If you are using Fargate, you don’t need to think about managing those resources.

Autoscaling capability: If your application needs more resources and you have enabled this, you don’t need to worry about how you will scale it further whenever required.

Pricing: Fargate Launch Type, billing is based on CPU or memory requirements per second. You only have to pay for what your task uses, no need to pay for extra for EC2 instances that go unused.

To deploy our Glific applications on ECS, we need the following 4 items set up. 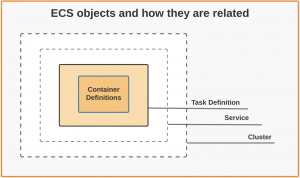 Here is how it looks when we successfully deployed our applications on ECS.

Amazon Elastic Container Registry (ECR), which is a private Docker Registry managed by AWS. Though we can use the docker hub repository, seeing compatibility with Fargate and CodePipeline, I preferred to use ECR over the docker hub to store docker images we are building using the AWS CodePipeline.

Why we are using NLB (Network Load Balancer) for the backend application?

The glific backend is using socket requests for live chat which uses custom TCP and ALB only provides HTTP/HTTPS. To make the socket connection work, we needed an NLB that supports custom TCP.

RDS for the database

In Glific, we are using the Postgres database. Seeing the advantages, RDS is a good choice for our application. It provides high availability, scalability, and performance. It also provides the Backup mechanism whether that is automated or Point-in-Time snapshots which the user initiates.

AWS CodePipeline is an Amazon Web Services for CI/CD of applications hosted on various AWS platforms. It automates the software deployment process allowing a developer to quickly model, visualize, and deliver code for new features and updates.

Our CodePipeline is consisting of three different stages: 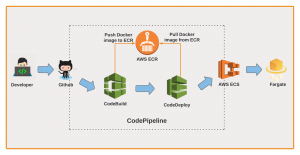 Source: We are using GitHub as a source code repository. This step checks for any changes on a specific branch (configured while creating this step) and pulls the code changes.

Build: This stage uses the codebase available after running step 1, builds the docker image, and pushes it to the ECR.

Deploy: This stage is responsible to deploy the latest docker image to AWS ECS (Fargate) service.

It creates a replica of the old ECS task and runs it parallel with the old one. If the deployment fails due to any reason, it stops the new task but the old task remains up.

If everything goes well, it triggers a health check on a new task, and on success, it stops the old task.

The benefit of using an AWS CodePipeline for an AWS ECS service is that the ECS service continues to run while a new Docker image is built and deployed. So the user will not be facing any downtime in between. 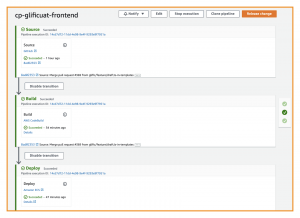 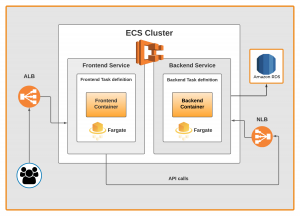 I’ll be posting the blog consisting of a detailed step by step deployment guideline. Stay in touch for the updates.